The official community site dedicated to the hit fanfiction Glee: The Next Generation and it's spin-off, Glee: The Next Generation presents The NYADA Years, that anyone can edit. However, we can only grow with YOUR help. If you're new to this wiki, please look at our site rules. If you have any problems please ask one of the admins for help. If you have previously contributed to a wiki before, and want to add a new page, go ahead and add it here:

Glee: The Next Generation Season 4 Credits

Add a photo to this gallery
Be sure to also check out Glee: The Next Generation on our other official pages!

The Glee: The Next Generation wiki is not affiliated with FOX Studios. All trademarks, copyrights and/or legal ownership of items are property of their respective owners. This wiki is a fun, informative guide to all Glee: The Next Gen fans. 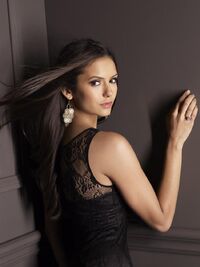 As the younger half sister of Rachel Berry, funky, sweet, and fierce Honey Berry is the epitome of a star. Though she spent most of her time prior to Season 4 breaking out of her sister's shadow and coming into her own, by Season 4, Honey is very much her own person. Though her sweet romance with Jaxon Pierce's adopted brother Declan Pierce came to an end when Declan went to college, she bounced back with bashing victim Lucas Aguirre. However, as Season 4 has shown, Honey has been having an affair with bad boy and ladies's man Miles Larson. But just who will be the one hurt?

Jameson
Jameson is the couple formed by Jaxon Pierce and James Holland. They are currently enganged.

Retrieved from "https://gleethenextgenerationfanfiction.fandom.com/wiki/Glee:_The_Next_Generation_Fan_Fiction_Wiki?oldid=30152"
Community content is available under CC-BY-SA unless otherwise noted.